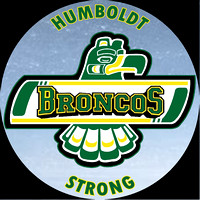 It's been one year since I was at a birthday dinner with some friends, and one of my hockey moms sent an article about a bus crash in Saskatchewan involving a hockey team. We read about it, and started following it while we were still at dinner, hoping it wasn't that bad. By the time I got home, more and more details came out, more and more bad news. I couldn't stop checking it, hoping that there were survivors. Hoping that no one else died. My heart shattered every time they added a new photo to the list of those gone.  I couldn't stop crying.

I may not know these kids. I may not know these families, but as I saw all the beautiful lives lost, the young lives cut short by such a horrific incident, I couldn't help thinking of all the Thunderbirds players I've watched and gotten to know. I couldn't help thinking of all of my hockey families I've become friends with, and my heart just kept breaking. I watched the next few days as more and more was released. Crying, heartbroken. Helpless to do something. Wishing I could help somehow. Then as time went on I watched the go fund me rise to unthinkable numbers. I watched as the entire hockey community came together to grieve. To support. To begin to bring hope. I put my stick out by my door, where it's been since and will be for the foreseeable future. I watched as hundreds of thousands of people did the same and once again was blown away by the hockey community.

In June I lost my dad, and suddenly I was able to understand the grief on a personal level, something I never wanted to be able to do.  To have your loved one when you go to sleep one night, then have them gone in an instant the next day. It's a different level of grief of course, since these families lost kids, but my heart went out to them even more.  Two days before my dad died I received a Humboldt Strong bracelet from a beautiful soul on twitter. It hasn't left my wrist since, and in the weeks following, it brought me strength and got me through, just seeing those yellow crystals, just knowing that so many people around the world were wearing them and pouring love into their bracelets. Somehow I could feel that strength. 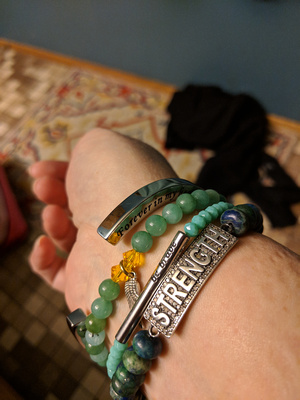 This winter I went on a road trip through Saskatchewan. The most important thing we did on that trip was stop at the Humboldt crash site. The air changed as we drew close to the intersection. You could feel the weight of what happened there. The day we went was bitterly cold and windy, which seemed fitting. There was deep snow surrounding the crosses, so at first we stood at the perimeter and just looked. But I felt like I had to get closer. To look at each and every cross and each and every item, to pay my respects. I also wanted to leave something, and chose a small crystal I had with me. I had been carrying it around with me since two days after I lost my dad, and it just seemed right to leave it with those lost at that spot. So we trudged through the knee deep snow, and even though it was so cold, we took our time to look at everything that was showing through the snow. So much sadness, so much loss, but yet so much love with all of the items that had been left for the 16 lost. I left my crystal on the base of one of the front crosses, with a little prayer, and a lot of love. I honestly don't even know how long we were there, but we finally pulled ourselves away, got back in the car and silently drove away. A few minutes later I broke down. Crying for the lives lost. Crying for the families left behind. Crying for the survivors who would never be the same. Crying for my dad. My friend silently held my hand as the tears ran down my face.  I am so thankful that we went a couple of hours out of our way that day.  It was necessary and needed.

Over the past year I've watched as the survivors picked themselves up. They've set seemingly unattainable goals and surpassed them, spoken publicly, and done things I'm not sure I'd be able to do after such a tragedy. I've watched them inspire a world with their strength. I've watched them change the world through their actions. Every day my I am blown away by the strength I see in these 29 families. In the kids who are broken but not bent. In the parents who lost their heart and soul.  Not one day has gone by when I haven't thought of the families who lost so much one year ago. They are always on my mind and in my heart. As I said, I may not know these families. I may not know the kids, but I sure know and love a lot of families just like them. I may not know them, but they are part of our big beautiful hockey family. And we are ALL Humboldt Strong. Today and every day.