The day my world changed

It's incredible how one phone call can completely change your life and turn it into something you don't even recognize. Five months later and I'm still reeling.

It was a Saturday morning like any other. I got up, (actually got dressed since I was heading out the door early to get some shopping done,) came downstairs, gave the kitties their treats and started making my smoothie. My phone rang, and checking it, I saw it was my parents. I smiled thinking that they were calling to support and encourage me after having to deal with some book world drama the day before. Since the blender was running, I let it go to voicemail, planning to call them back as soon as I was done blending. Then it rang again. So I picked it up. And instead of my my mom and dad's soothing voices on the other end, it was my mom. Panicked like I have never heard her. Saying six word I never thought I would hear. "Your dad's had a heart attack." I tried to ask her questions as the words sank in and I began to panic. All she could say was "get here Shauna." I grabbed my purse and walked out the door with the clothes on my back. Already praying to God, the Universe, to anyone that he would be okay. I mean he had to be. He was healthy, and strong. He did yoga every morning for fifty years, lifted weights, worked out every day. He ate well and took his vitamins. Maybe they made a mistake? No way MY dad had a heart attack. I got in the car and began the worst drive of my life, the 2 1/2 hour (without traffic) drive around the peninsula.

I'll be honest. I barely remember that drive, and I definitely shouldn't have been driving. I was NOT holding it together. I was sobbing, praying, freaking out. But my only thought was to get to my mom. To get to my dad. I didn't have time to wait, to call someone, to hope they may drive me. I had to go right then. It was Saturday morning, so my brother was sleeping in. But I called. And called again, hoping that their phones weren't on silent. I called my friend Kristina, my spiritual adviser who had already gotten me through so much in the few short years I had known her. She is probably one of the only reasons I made it through that drive. I wasn't there. I wasn't present. But she was a calming presence. She kept me from completely falling apart. Barely. I realized about 30 minutes into the drive that I should probably call the hospital to make sure they had made it there. I looked up the number and called the Port Townsend hospital. They knew nothing, and didn't have my dad. They gave me a number for a Bremerton hospital where they could have brought him and I called there as well. (All while I was driving and bawling)  See, the thought never crossed my mind that my dad wouldn't make it to the hospital. Up to this point I KNEW that he would be okay. There wasn't a doubt in my mind that he would be okay. Why wouldn't he be? He was healthy. Strong. Plenty of people had a heart attack and lived and they weren't even close to as healthy as my dad. SO I KNEW that he would be okay. I trusted the Universe, I believed. Until I called their house again when the second hospital had no information either. I don't even remember who picked up the phone. My mom? Her friend Lisa? I don't know. All I know is that the Fire Chief took the phone from them, took it into the office and said the words that would crumble my word into pieces. That would forever change who I am and turn everything into a fog. He said "I am so sorry, but your dad is gone. We worked on him for 45 minutes, but we couldn't revive him. We kept trying because your mom couldn't let him go." I don't remember what I said. I think I thanked him? I didn't want to believe him. I wanted to crumble into a ball and fall apart, but I couldn't because I was driving, and I had to get to my mom.  I asked for my mom and again, letting him know I wouldn't tell her since they hadn't yet. I couldn't be the one to say those words to my beautiful mama. I somehow held it together long enough to tell her I was coming. That I was halfway there.

I hung up the phone, and I couldn't breathe. I felt as though all the air had been taken out of my lungs. I was sobbing. I was in disbelief. There had to be a mistake. This was not happening to my dad. To my family. Just then a beautiful Blue Heron lifted from behind the concrete barrier, coming out of nowhere, and flew over my car. I knew. I knew it was my dad letting me know he was with me. And I just kept driving even though I was falling to pieces. I'll say it again. Thank God for Kristina. I called her back, and she talked with me until I was about 30 minutes away from my parents' house. She was trying to get her kids ready for the day, getting them out the door, but she talked to me the entire time. She was my rock, one of the only reasons I made it through that drive. Now I am also pretty sure my dad was riding along with me, keeping me safe until I could get to the love of his life, but at the time I didn't feel it. Some of you may not believe in this, but at one point Kristina said "He's here. I can feel his love for you. He's pouring so much love into me for you that I'm getting gooesbumps. He wants to make sure you know he's here and loves you." She had never met him, but I had talked to him so many times about how this woman had helped me, how she had gotten me through so much, so he knew she would feel him there even when I couldn't.

This whole time I was calling my brother in between talking to her. My messages getting increasingly panicked. I called my sister in law. And finally when I was about 20 min out from my parents' house I snapchatted my niece telling her to go wake up her parents if she was up. She responded immediately, and they called me so I could break the worst news of our life. Our dad, our rock, was gone. I will never forget the wailing I heard on the other end. I don't even know which of the three of them made that noise, I just know that my heart broke a little bit more hearing it. They said they would be out the door as soon as they could be to catch a ferry.

While I was driving, I thought my mom was alone. I had no idea that her amazing neighbors came over as soon as they saw the ambulance and held her through the whole thing. I pulled into their driveway. Shaking. Bawling. And sat in the car for a brief moment to pull myself together so that I could be strong for my mom. I walked in the door, and she was sitting with people holding both of her hands. My heart broke a little more in the moment I saw her, knowing that the love of her life was gone. The man she had been with and in love with for 50 years was gone. She flew into my arms, and we cried. We cried for the loss of her love, my dad. For a man that gave so much to the world, and still had so much to give. For a man who was ripped so suddenly from us. I held her tight wondering how anything would ever be okay again.

I am still wondering that today, five months later as I write this. Because how can anything be okay when the light that guided us was snuffed out? When my anchor was suddenly gone, leaving me drifting aimlessly and lost? How can anything ever be okay when my mom is suddenly alone when she used to always have his strength by her side?  There's no closure. I didn't get to say goodbye. I didn't even know I should. I will say I am thankful that he knew how much I loved him, and I knew the same. We talked almost every day, and always said "I love you." For that I am beyond thankful. But God I miss being able to ask him questions about my business. To be able to email back and forth about random stupid shit that happens every day. I miss knowing that he and my mom are safe and happy in their beautiful, loving world, happy and still so in love after 50 years. I miss him every single moment of every single day. And I am struggling to find my identity without him. He and my mom are the reason I am who I am. So who the hell am I without him when my identity is so rooted in them?  I know he's here. I know he's with us every day, but it's not the same. And I know he understood death. Didn't fear it, and understood it on a different level. I wish I could be at that level right now. I know he hates seeing us sad, especially my mom, and tries everything he can from where he is to change that. But even knowing these things I miss him so much. I don't understand why this happened. I'm mad. I'm sad. I'm in a fog. I'm just plain lost.

I do have moments though. Where I can feel that positive, happy bit of me trying to push through. I just can't grasp it. Because if I try I remember that he's gone, and it goes away completely. My mom feels it too, and it gives me a glimmer of hope that at some point it will bubble over for more than a fleeting moment. That at some point we will start having more "happy" moments than sad ones. I especially hope this for my mom. I would give anything in this world for my mom to be happy again. Not just for a moment when we are doing something fun, or enjoying ourselves, but for that time when that happiness outweighs that sadness again. I have to believe that will happen. The outpouring of love from both people I am close to, and people I barely know has been incredible. I may not be responding to everyone, but every single word. Every single bit of love sent our way helps.

I honestly am not sure why I am sharing all of this with you. I guess because it was cathartic to write. I guess so that you can get a glimpse into why I have been absent, why my business is so slow, and why I am so slow at getting back to people. But also to let others who are grieving know that they are not alone. That others have felt the same pain, the same loss, the same ending of hope.  My inbox is always open for anyone who needs to talk. I know how alone this can make you feel. 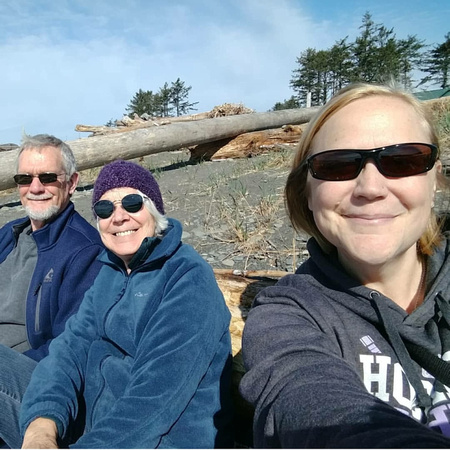 A book that has helped me and my mom, and rose quartz that we have had with us since that day.