An open letter to sports fans

To the Everett Silvertips' fan who decided to harass a female Thunderbirds fan after the last game, here's something you should know. That girl came to cheer on her team because it's her happy place.  She came to watch her team play because it's the one place she can escape reality right now. She even risked coming to a barn where she has been harassed in the past because she needs that escape. That girl, the one who was minding her own business walking out of the arena after a loss, the one you chose to hurt by ringing your cowbell as loudly as you could within inches of her ear, that girl lost her dad six months ago.  She is barely making it through the holidays right now because she is missing him so much, so she goes to as many as her team's games to distract from that, because win or lose, watching her boys play helps. So by being a complete jerk and choosing to harass a fan who was doing nothing to you except wearing the opposing team's jersey, you ruined her night, and made her that much less likely to come support her team in your barn no matter how much she needs it.   You took a grieving girl who is barely holding on, to the edge, and where you may have seen an overreaction to your stupid prank, she was holding herself back from so much more. She saved that for when she got outside of the arena and broke down in the dark.  By deciding to be a jerk to someone who was doing nothing to you, you took away her happy place.

So here's an open letter to all sports fans. Be kind. Be respectful. Let people cheer on their teams respectfully and in peace. You never know how much being there means to them.  You never know who may be fighting a battle and barely holding on. 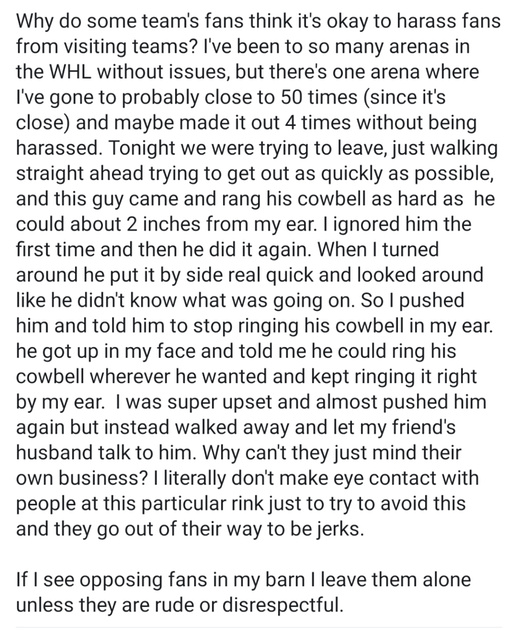 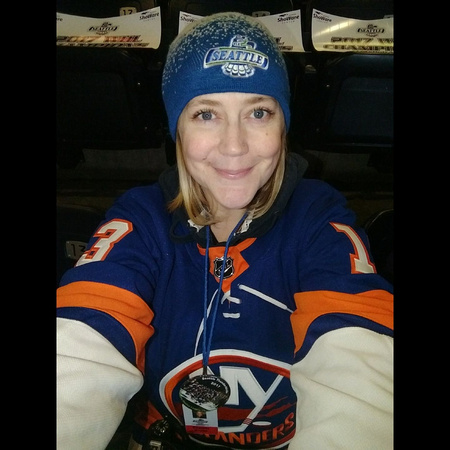 Hockey is my happy place

Candace(non-registered)
Thats horrible. I dont understand some fans, and their reasons of being so mean/gloting at the expence of visiting teams fans. I Myself am a Portland Winterhawks fan, and this past weekend I was extreamly upset by seeing a fan of Portland flipping off the Kelowna goalie after we scored a goal. It was completly un nessasary. Ive never acted this way, if I do come a visiting fan I eaither ignore, or tell them good game/congratulate and show sportsman ship. We all have something in common, we are all hockey fans why can't we all just treat each other with respect. This also goes for heckling the boys playing. They are just teenage boys, what if that was your son someone was bad mouthing? Would you be happy and laughing? No probably not.
No comments posted.
Loading...
Subscribe
RSS
Recent Posts
You survived 2020...be proud of that Finding Peace in this crazy world Small business spotlight #6-Mandi's Muses Small business spotlight #5- Red Headed Scents Small business spotlight #4- InMySpareTime Small business spotlight #3-Kruse Images and Photography Small Business Spotlight #2-Obsidian Reflections Small Business Spotlight #1- Life Force Creatives One Year Humboldt Strong Hockey isn't just a game
Keywords
family black Friday Christmas Christmas shopping Cyber Monday family business Handmade holiday shopping Holidays shop small
Archive
January February March April May June July August September October November December
© Kruse Images and Photography
Powered by ZENFOLIO User Agreement
Cancel
Continue